The Birth of Heritage Tourism

The period of United States history between the Civil War and Progressive Era saw the rise of “historical tourism” or “heritage tourism.” This growing industry sought to boost local economies and create an identity for communities, some that had taken up residence less than a century before. Part of this larger trend, the Old Spanish Trail attempted to establish an identity for the American southwest through heritage tourism.

While the many artifacts of the Spanish colonial period told a compelling story without any dramatization, heritage tourism created a more idealized version of history. Boosters labored to make the ethnically diverse southwest into an idyllic setting for largely Anglo-American tourists and new inhabitants. This narrative glossed over the violent struggle of conquest that killed and disenfranchised indigenous people. This quaint vision of romance and exploration silently affirmed that progress is white, that Indigenous people needed to be “civilized,” and that Mexicans needed Anglos to tell them what to do.

This phenomenon is seen across the southwest--in the Fiesta de Los Angeles, the Mission play, and many other pageants celebrating Spanish conquest. It can be uncomfortable to consider the people displaced by colonization and resettlement. Ultimately, any celebration of history is incomplete without considering the many perspectives that make up our human story. 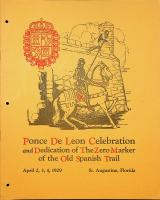 The Old Spanish Trail creatively connected existing tourist hubs of the south and southwest and used the colonial perspective to tell a compelling story about the past, but this story has many of the same flaws as other heritage tourism efforts from this period in its failure to represent a multitude of perspectives of the colonial era.