Why was the Old Spanish Trail Built? 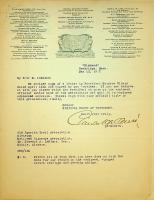 The Old Spanish Trail emerged in the 1920s at the intersection of state and individual interests. It was one of the many highways built during the Good Roads Movement, also known as the golden age of highway construction. Highways were a new technology that connected previously isolated communities and boosted the farming and tourism industries. The Federal Aid Road Act of 1916 made funds available for states to begin constructing highways, but World War I slowed its implementation. After the war ended, the need for an interstate highway system was clear--not only for its utility in times of peace, but also in preparation for possible future armed conflicts.

In addition, the Old Spanish Trail met a growing need to provide farmers with greater access to local and national markets. Prior to the rise of highways, farmers and manufacturers paid to fill train cars with their goods. Even if suppliers couldn’t fill a full car, they still had to pay for that full space unless they could find another supplier to split the cost with. Trucks, however, could transport smaller loads, which suited the needs of smaller producers. But, these trucks needed more roads to truly be effective at connecting farmers to broader markets.

The OST also reduced the isolation of rural towns throughout the South, providing a safe and speedy method of travel between smaller settlements. Particularly in the southeast U.S., swamps and poor conditions made the terrain difficult to traverse by vehicle. The OST paved the way through these difficult segments. The cost was high but the reward for locals along the route was significant. The route’s thematic emphasis on history strategically incorporated tourist attractions that brought commerce to towns previously overlooked by travelers. This benefited the local populations who poured their own money and effort into the creation of the trail, eventually recouping the cost of construction.

The OST gained support from the counties along the trail by selling its benefits for small farmers, the appeal to protect national safety, and the promise of tourists. The U.S. government formally endorsed this project in 1922, which helped launch this historic trail on its way to infamy.