The Fate of the Trail 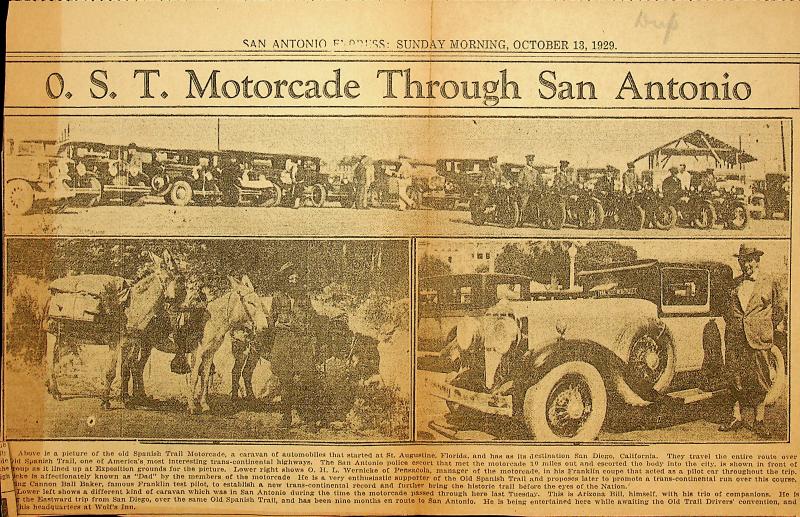 Both the Old Spanish Trail Association and Old Spanish Trail underwent several transformations as highway systems were federally standardized throughout the decades that followed. The OST Association resisted efforts to change the OST name even before the trail was completed as they considered its name to be an integral part of the OST’s identity and significance. Despite their efforts to resist state and country-wide standardization, ultimately the OST was subsumed by larger, numbered highways.

The OST Association largely dissolved in 1929, after they declared the highway as complete, which met their primary objective. They commemorated its completion with a motorcade from St. Augustine, Florida to San Diego, California, aiming to host the largest motorcade to date. However, due to poor weather conditions, the motorcade finished with a mere 15 cars.

After its dissolution, smaller factions of the OST Association remained, with no head office or governing board. The managing director, Harral Ayres, returned to New Jersey to take care of his elderly mother. Decades later, in the early 1950s, the surviving factions of the OST Association formed the OST Inc., and aimed to increase traffic on US 90, a part of the former OST.

The trail itself quickly lost its name after the OST Association dissolved, and highways IH 10 and US 80 and 90 subsumed sections of the OST, while other portions were incorporated into city streets or forgotten outright. Today, these segments have been repaved, and drivers can still traverse portions of the OST. The OST100 organization, formed in 2002, celebrates the centennial of the OST’s construction with reenactments and motorcades that mirror the events that unfolded surrounding the highway’s planning and completion. OST100 celebrates the legacy of the many people that created this iconic highway, and the era of romance that marked the early 20th century.